Free Professional Development
Or
Close Popup
+
5 Tutorials that teach Z-Test for Population Proportions
See All
Take your pick:
Previous Next

Calculate z-statistic of a population proportion.

Tutorial
what's covered
This tutorial will cover how to calculate a hypothesis test for population proportions. Our discussion breaks down as follows:

1. Calculating a Z-Test for Population Proportions

When calculating a z-test for population proportions, you need the following information:

This information will be plugged into the formula for a z-statistic of population proportions:

hint
You can also find this probability using technology.

Approximately 10% of the population is left-handed, with a standard deviation of 3.13%. Of 100 randomly selected people, 14 claimed to be left-handed.

Find the z-test statistic for this data set.

This type of data is qualitative data; people are answering either yes or no. They're either left-handed or not left-handed. We're placing the answers into categories, which is why it's also called categorical data.

Let's go ahead and calculate the z-score. 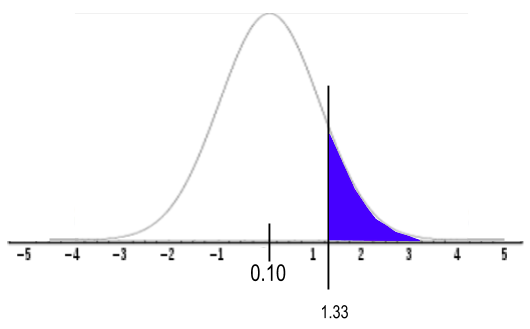 A type of hypothesis test used to test an assumed population proportion.

2. Conducting a Z-Test for Population Proportions

When running a hypothesis test for population proportions, the same four parts apply every time:

Step 3: Calculate the test statistic and the p-value

Step 4: Compare your test statistic to your chosen critical value, or your p-value to your chosen significance level. Based on how they compare, state a decision about the null hypothesis and conclusion in the context of the problem.

Let's look at a situation that would require proportions.

A popular consumer report reported that 80% of all supermarket prices end in the digits 9 or 5. Suppose you review a random sample of 115 items to check it against the consumer report, and you find that only 88 items end in 9 or 5. That's less than 80%.

The question that we need to consider is this significantly less than 80%? Is this evidence that, in fact, less than 80% of all items at the supermarket have a price ending in 9 or 5?

Your null hypothesis is the "nothing's going on" hypothesis. In this case, it's the "there is no reason to disbelieve the consumer report" hypothesis. Rewrite it as p equals 0.8. The true proportion of all prices ending in 9 or 5 is 80% at the supermarket.

Conversely, the alternative hypothesis suspects that something is amiss, that it is actually less than 80%. We are going to say that p, the true proportion of prices ending in 9 or 5, is below 80%.

In this problem, choose a significance level of 0.10. With the decision rule, if the p-value is less than 0.10, you’ll reject the null hypothesis in favor of the alternative.

You should be familiar with the conditions: randomness, independence, and normality. Look at them one at a time.


Going back to the example:

All three conditions have been checked, and we're good to go.

Step 3: Calculate the test statistic and calculate the p-value based on the normal sampling distribution.

Now you can perform the z-test for population proportions. It's going to be the statistic (88 over 115) minus the hypothesized parameter (0.80) over the standard error. The standard error in this case is the square root of p times q divided by n.

When you evaluate the fraction, you get a z-score of negative 0.93. Then, you can find negative 0.93 on the normal distribution that is the sampling distribution for p-hat, and find the tail probability by using a normal z-table.

You can find that area using the normal table, and you get 0.1762, or about 18% of the time. This means that if the null hypothesis was true and this distribution was really centered at 0.8, meaning the true proportion of prices ending in 9 or 5 was 0.8, you would find something at least as low as we got about 18% of the time.

Step 4: Compare your test statistic to your chosen critical value or your p-value to our chosen significance level.

Based on how your p-value compares to your chosen significance level, which you may recall was 0.10, you're going to make a decision about the null hypothesis and state the conclusion. In your case, 0.1762 is greater than 0.10. Your decision, then, is that you fail to reject the null hypothesis. The conclusion is that there's not sufficient evidence to conclude that less than 80% of supermarket prices end in 9 or 5. You don't have strong enough evidence to reject the claim of the consumer report.

summary
The steps in any hypothesis test are always the same. You start by stating your null and alternative hypotheses, which is where you would also state your alpha level. Next, state and verify the conditions. Calculate the test statistic and the p-value. Finally, based on your p-value, compare it to your alpha level and make a decision about the null hypothesis and state it in the context of the problem. In this case, we did a z-test for population proportions, and it's analogous to any other hypothesis tests that you do. The only thing that you changed was how you verified the normality condition, because you needed np to be at least 10 and nq to be at least 10.

A type of hypothesis test used to test an assumed population proportion.