Or
Close Popup
+
3 Tutorials that teach Introduction to Slope
Take your pick:
Previous Next

Identify the slope of a line perpendicular to a given line.

As we graph lines, we will want to be able to identify different properties of the lines we graph. One of the most important properties of a line is its slope. Slope is a measure of steepness. A line with a large slope, such as 25, is very steep. A line with a small slope, such as 0.10 is very flat. We will also use slope to describe the direction of the line. A line that goes up from left to right will have a positive slope and a line that goes down from left to right will have a negative slope.

As we measure steepness, we are interested in how fast the line rises compared to how far the line runs. For this reason we will describe slope as the fraction

. It turns out that if we have a graph, we can draw vertical and horizontal lines from one point to another to make what is called a slope triangle. The sides of the slope triangle give us our slope. The following examples show graphs that we find the slope of using this idea. 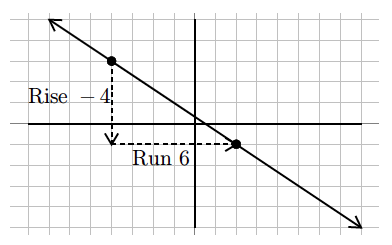 To find the slope of this line, we will consider the rise, or vertical change and the run or horizontal change. Drawing these lines in makes a slope triangle that we can use to count from one point to the next the graph goes down 4, right 6. This is rise − 4, run 6. As a fraction it would be,

. Reduce the fraction to get 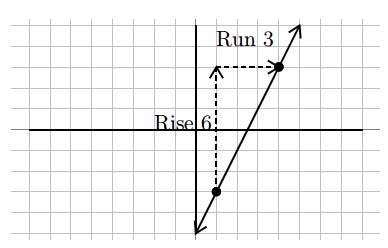 To find the slope of this line, the rise is up 6, the run is right 3. Our slope is then written as a fraction, rise over run or

When mathematicians began working with slope, it was called the modular slope. For this reason we often represent the slope with the variable m. Now we have the following for slope.

2. Slopes of Vertical and Horizontal Lines

There are two special lines that have unique slopes that we need to be aware of. The line below is a horizontal line. 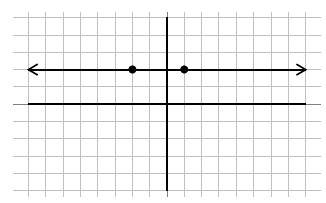 For this line, the slope is not steep at all, in fact it is flat. Therefore it has a zero slope. All horizontal lines have a zero slope.

This next line is a vertical line. 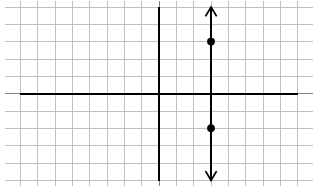 As you can see there is a big difference between having a zero slope and having no slope or undefined slope. Remember, slope is a measure of steepness.

3. Slopes of Parallel and Perpendicular Lines

Let's take a further look at the example above with perpendicular lines. 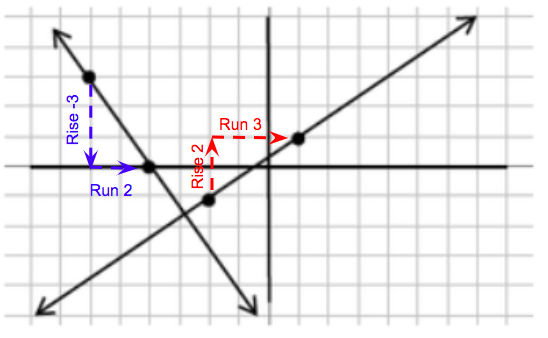 . The other line that is perpendicular has a rise of 2 and a run of 3, so the slope of this line is

lines that never intersect; they have identical slopes

lines that intersect at a right angle; they have opposite reciprocal slopes

summary
The slope of a line is a measure of how steep it is. When reading a graph from left to right, lines with a negative slope head towards negative infinity on the y-axis and lines with a positive slope head towards positive infinity on the y-axis. The slopes of vertical and horizontal lines are unique. Horizontal lines have a slope of zero and vertical lines have a slope that is undefined. The slopes of parallel and perpendicular lines are special too. Parallel lines have the same slope and perpendicular lines have slopes that are opposite reciprocals of each other.
Terms to Know

lines that never intersect; they have identical slopes

lines that intersect at a right angle; they have opposite reciprocal slopes