Using z-Scores to find a Probability

Provided with a table learner can find proportions based on z-scores.

Tutorial
what's covered
This lesson discusses using z-scores to find a probability. By the end of this lesson, you will be able to use a z-score probability table to determine the likelihood of a range of values of a normally distributed variable occurring. This lesson covers:

The graph you see here is that of a standard, normally distributed variable, otherwise known as a z-distribution. Because they allow you to know the position of a value in a normal distribution, z-scores are important. When you know a z-score associated with the value of a variable, you are able to determine the likelihood that an event will take place. Simply having a solid understanding of z-scores and how they are associated to probability allows you to easily determine the likelihood of an event occurring. 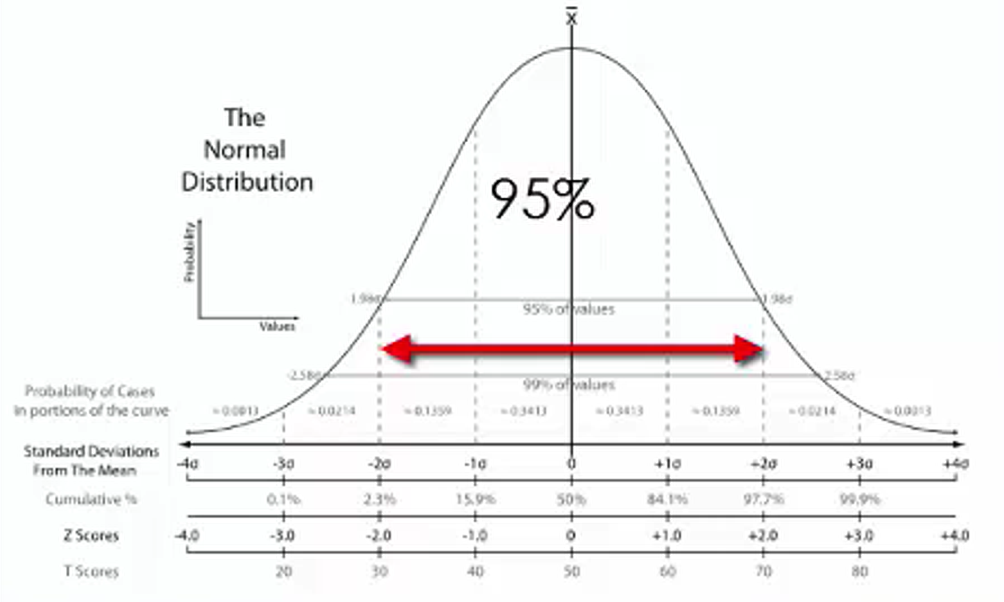 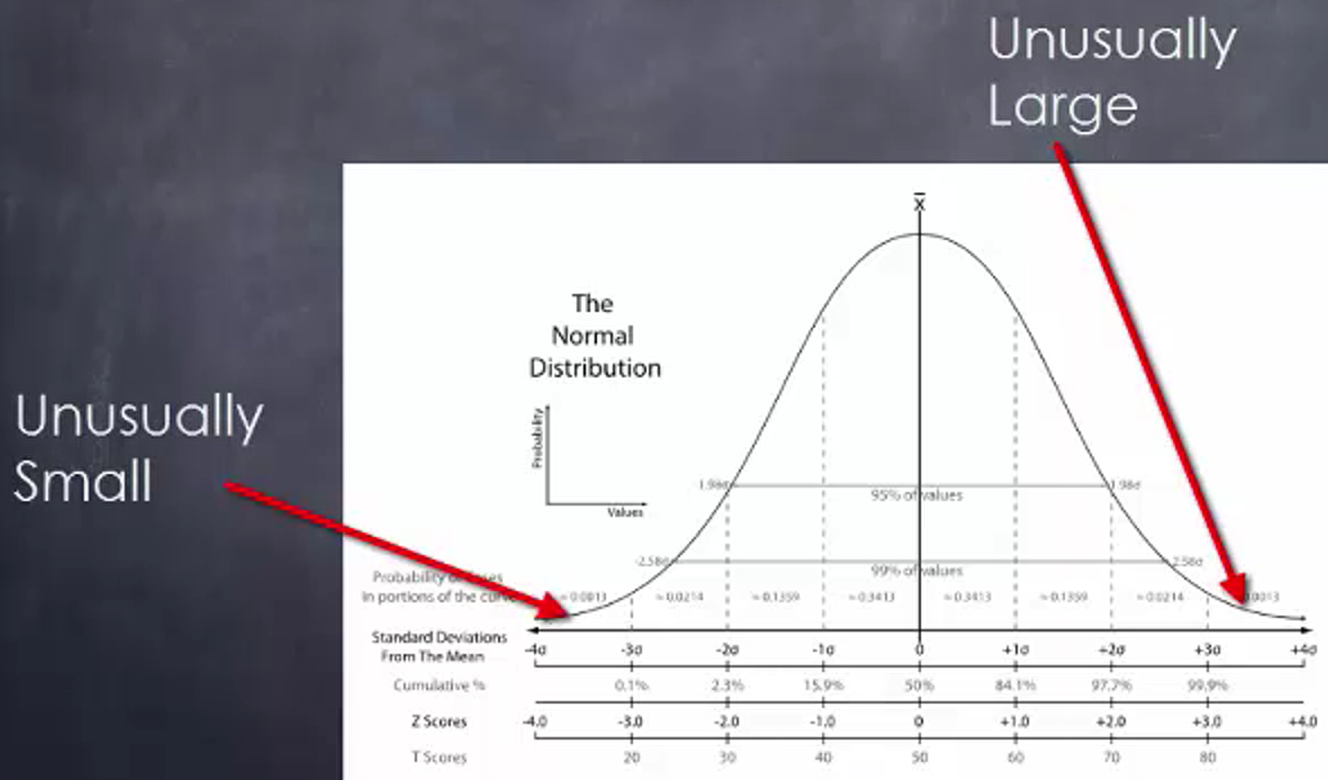 If there was a home with an area 4,080 square feet, the z-score would be equal to 4.2 based upon the same calculations.

think about it
Of these three z-scores, which are likely to occur?

The 2,300-square-foot home is likely to occur in a sample of homes drawn from a normally distributed population. However, the 1,450-square-foot home and the 4,080-foot-square home would be very unlikely because they don’t fall between a z-score of -2 and 2.

Since the z-distribution is a standard normal distribution, z-scores and probabilities that are associated with a specific z-score can be represented on standard tables. This being the case, you can use a table to find the areas under a z-distribution curve.

When viewing a normal distribution graph, the area under the curve is associated with the probabilities of a value occurring. So knowing the area corresponding to a z-score tells us about the probability of an event taking place. 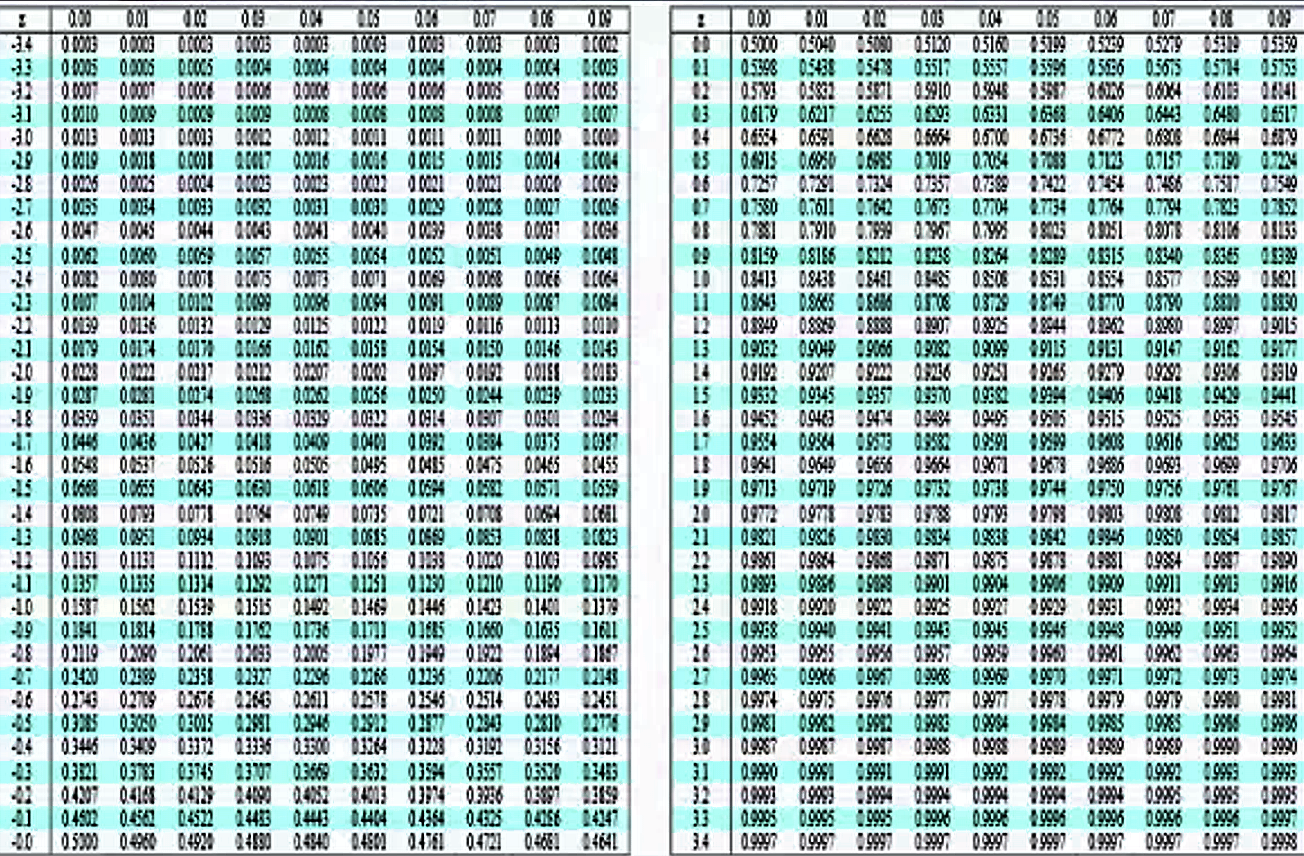 The values for both z-tables correspond with the same information that is illustrated in a z-distribution graph, but actually tell more about the specific likelihood of an event occurring.

Take a look at ACT scores to illustrate this. The American College Test is taken by high school students all across the United States as a means of determining their aptitude for attending college. Let’s suppose in this instance that the mean score for the population is 21, and the standard deviation in this case is 5. How will you determine the probability that a score would fall within a particular range?

Consider the probability that the score would be higher than 30. How do you determine what that value is? The first thing you do is use the z-score formula to figure out what the z-score is. In this case, it is the difference between 30 and 21, which is 9, divided by the standard deviation of 5, which gives you a z-score of 1.8. If you look at the z-table below, that gives you a probability value of 0.9641. 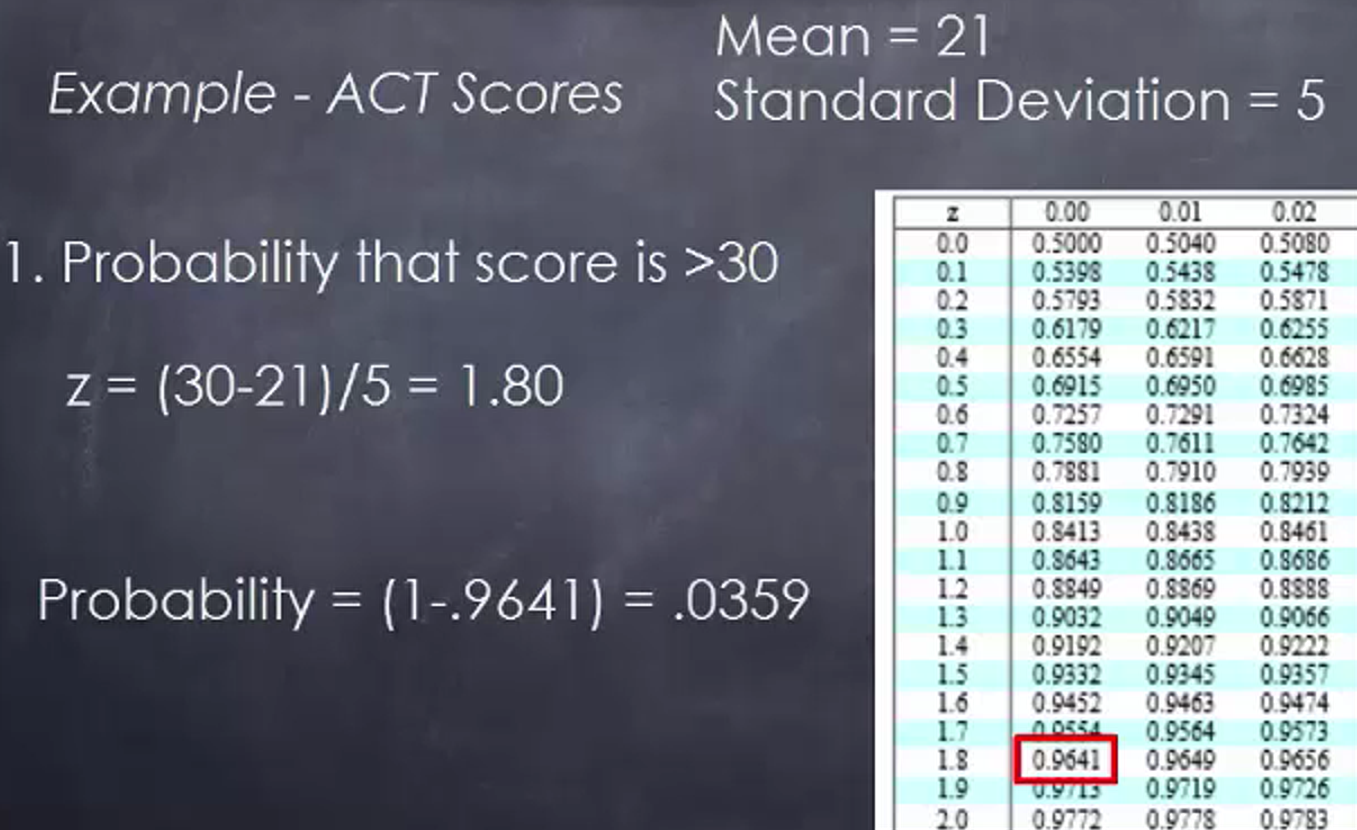 Now, what does that tell you? It tells you that the area to the left of that point is 0.9641, or roughly 96% of the area under the curve falls to the left of z equal to 1.8. To determine the probability that the score is greater than 30, you’re interested in the difference between 0.9641 and 1, which gives you a probability of 0.0359.

What if you’re interested in the probability that a score falls between 23 and 27? In this instance, you need to calculate two different z-scores, one for 23 and one for 27. Locate both of these z-scores on the z-table. Then subtract the difference between the greater value and the lower value. That is the probability that a randomly drawn score would fall between the range of 23 and 27.

What if you’re looking at some areas to the left of the mean? Suppose you’re interested in the probability that a score falls between 15 and 20. You will run the same type of calculations. The z-score for a 20 would be equal to a negative 0.2. The z-score for 15 would be equal to negative 1.2. Once again, you figure out the probabilities associated with each value by finding the difference. This works out to be a probability of 0.3056. 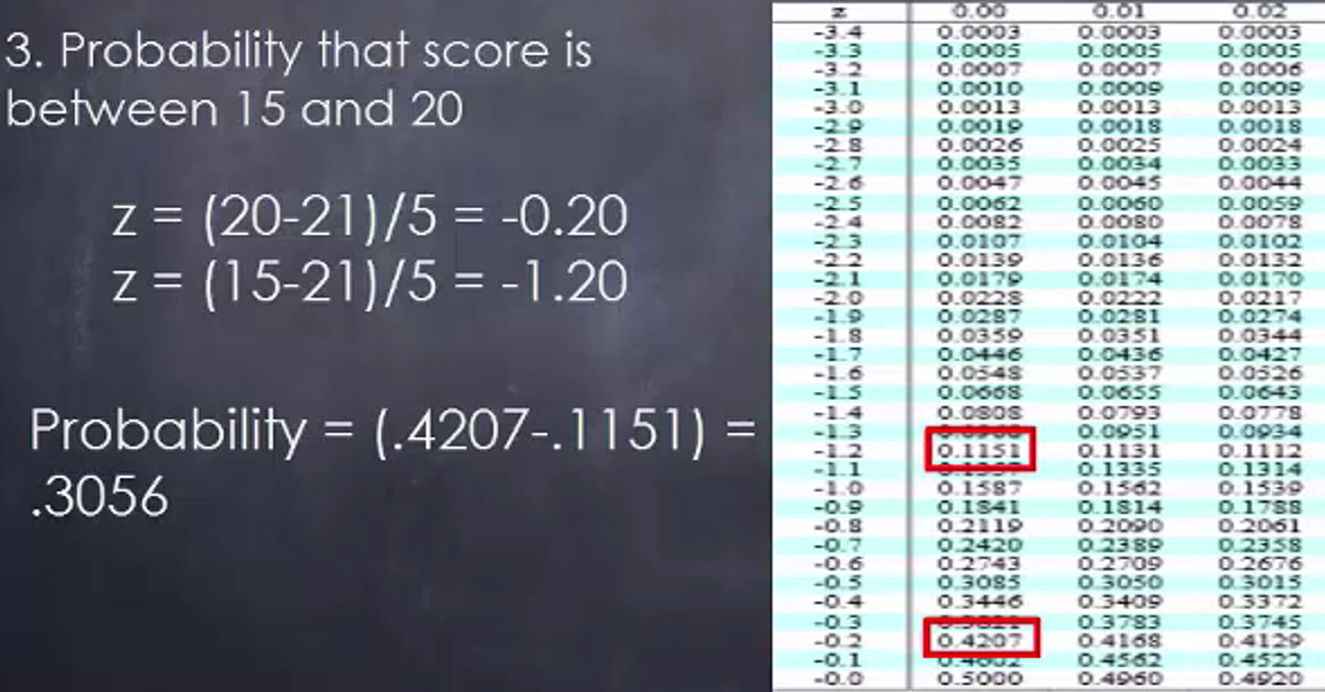 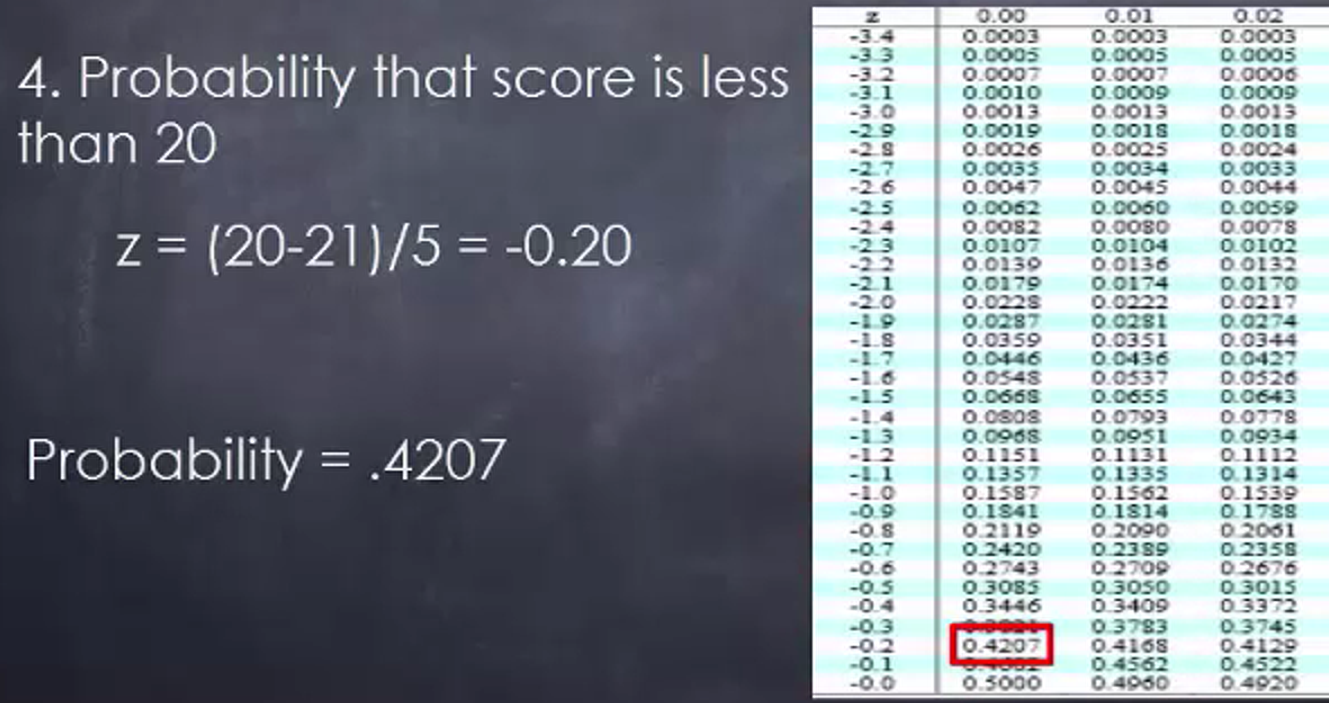 Suppose you were interested in finding the number of miles driven per year in which there were only 1.5% of all observations below that value. How do you determine that figure? Well, you establish your probability of 1.5%. Then divide that by 100 to arrive at a probability equal to 0.015, which is the value you will look up in your z-table.

You scan through the numbers until you find the value that’s equal to 0.015, which is going to be in the negative side of the z-table. Look at the columns and the rows, and you will find the value of 0.015 happens to have a z-value of -2.17. If you solve for that question mark, you’re going to wind up with a z-value of 11,993 miles per year. Only 1.5% of drivers drive fewer than that number of miles per year.

summary
You reviewed how normal distributions and z-scores relate. This lead into z-tables. These are a way to look up more detailed information that a graph can give. You also saw how z-tables are used in several examples. It can be used to determine the likelihood of a range of values of a normally distributed variable occurring. You can also reverse it and look at the probability first. You saw how from there you can figure out what the z-score would be.